Scios was safely out of the rich man's view, and out of danger of being caught, beaten, or turned into the athoritys.

Scios vowed never to steal again. He wasn't a dirty theif. He would have to go forward, on foot. His stomach growled. He pulled out his gun and poised his dagger. Maybe a rabbit could satisfy him for the night, he thought as he noted the setting sun.

He heard a scruffle in the sand. He turned around, and a rabbit sat there, staring, ears alert.

Carefully he raised his pistol.

No, I am NOT going to go out with you.

The member 'SaydeSim' has done the following action : Roll Dice

Scios sat around the fire he had built and stared at the stars. Admiring them, he tore a leg off of the roasting rabbit and nommed it down happily. The rabbit's meat was sweet, and it filled him.

Tired and full, he trekked to the nearest boulder, and set up a small bed.

No, I am NOT going to go out with you.

Princess Tart finally woke up on her makeshift throne in the middle of the chaos with soldiers walking, chatting, marching and running everywhere. She didn't realise what had happened but and east tower wall had been blown up, The same high ranking officer that had saved her from the weird man who attacked her from behind came jogging up to her but he looked as though he was in a hurry. She didn't quite know what was happening so she straightened herself up and looked in his direction.

"Maam, One of the East walls has been blown up by an unknown enemy, it is my duty to protect you in what ever way possible." The high ranking officer had said too fast for Princess Tart to understand but it only took her a few moments to take in the information.
"I have sent for a ship that will take you, 15 soldiers and anyone of importance to you over to Iyx City." In shock she just nodded and she got up just as the officer was just going to help her up.

"We must leave at once, will you be coming with me?"

"No, I'm afraid I must stay here and take over your place to watch over the remaining soldiers that weren't killed when the East Wall was blown up, I'm sorry Ma'am."

"My name is General Astrid Cooler, my Princess"

"That's a wonderful name, I hope to keep in touch, General Astrid." She said calmly and winked at him, obviously in approval. She made her way to the ship waiting for her with 15 soldiers, as General Astrid mentioned, clearly bored by the cheesy scene before them.

"There's Iyx City, Ma'am!" The Pilot of the ship shouted and pointed to the right side of him. There, below them was Iyx City, Princess Tart had been here a few times as a young child, it looked no different.

As the ship landed all the soldiers got off the ship and ran off to the headquarters while Princess tart, elegently glided off the ship without a bother and waltzed over to an awaiting officer....

After several weeks of cross country travel Andara finally reached the border with New Drace. She began to notice signs that all was not well. People were hiding in their homes, and shops were out of basic supplies. Several places were abandoned, or looted and burned...

Finally she saw an army in the distance. Waiting until nightfall she decided to see if she could get some accurate information on what kind of weapons they had and how many there were.

It was a Bermadian expeditionary force of about 500 men, plus some heavy guns. After getting a good look at the camp layout she stopped to think.

I wonder who needs to know about this? she asked herself. Obviously a lot of people already found out, but there must be someone who could use this kind of information before the enemy actually gets there. One person can move faster than a 500 man army, so wherever they are going, I can get there first. I just need to find out where that is.

The commander's tent was dark. With any luck there was something in there that would suggest where they were headed.

Waiting until the sentries changed their guard she quietly sneaked into the command tent to have a look around.

Yes! Battle plans, supply lists, and all sorts of other interesting information. Too bad she didn't have a way to copy everything. She carefully copied the battle plans and then quickly jotted down anything that looked like it might be useful to someone. Then she sneaked back out.

They had recently laid siege to the castle at Dreche, and now they were planning an invasion of Iyx. And since the tram would get her and her information to Iyx City much faster than the army could march there, she thought it was rather nice of them to have left enough money in the command tent to pay for a tram ticket for her. Surely someone in Iyx City would be interested in knowing the battle plans of the invading army!

Can I join now? :DD I know how to play, I have experience. I was playing Vampire the Mascarade role play with friends for a long time. 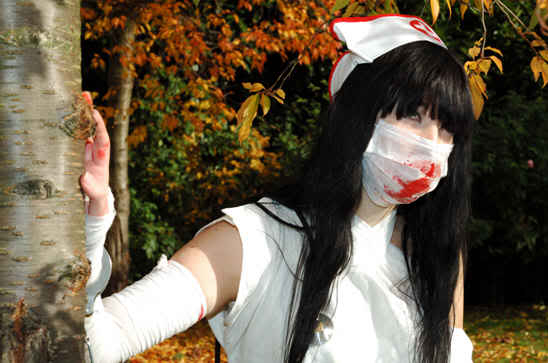 Character Skill: nurse / fighter (melee)
Character Weapon(s): syringe, surgical knife
Home Base: Paroxyma
Character Bio: Location: abandoned hospital
Helena has graduated medicine, that's all she remembers because of the certificate. Nothing more.
World had forgot about her existence. She has been surviving by survived eating the rest of the hospital's food supply.
Helena is mad ex nurse with amnesia (so I'll except whatever you tell me I was doing) she can't remember a thing about her past.

Advice Giver and Professional Listener, PM for ANY

Character Name: Aristo.
Character Appearance: Tall, around 6'7. Slender, with lots of lean muscle. Curly, short brown hair. Slightly pointed ears and an androgynous face. Bright green eyes with dashes of brilliant gold.
Character Skill: Craftsman. He makes wooden furniture for a living, and smelts down metals to ship to blacksmiths to forge new weapons with.
Character Weapon(s): A wooden bow, and a longsword.
Home Base: Arecedent.
Character Bio: A student learning the trade of woods working from the masters in South Arixo, he was studying abroad, away from his family, when the war broke out. He has had no contact with his family since, and he is determined to be reunited with them, even if that means risking his own life.

Aristo sawed another piece of wood into fourths, laying them aside so that the other students would have material for their projects, whether it be furniture, or a weapon.
"Curse this place! I should have never come here!" He mutters under his breath. He thinks back to his family. Then, he comes to the conclusion that the only way he'll ever be with them again is if he takes some action against Bermadia. He decides to leave the craftsman' compound tonight, sneaking past the guards, and hoping that he'll get away without a scratch.
___________________

The member 'Rikachu' has done the following action : Roll Dice

Aristo sneaks past the guards, without a single one of them noticing. He uses the ivy growing along the walls of the compound to climb up and over, and runs off into the night like a thief making a great escape.
___________________

The member 'ZimZ' has done the following action : Roll Dice

Oh well, seems it's not going to get back on it's feet, we're doomed.

I just remembered why I picked that destination.

After traveling for several days, Andara arrived in Iyx city. She was rather travel-stained, but she decided to look for someone to pass her information to before she spent any more of her stolen funds on a place to stay. Judging by the prices around here, she had enough for a week in an inn, plus two weeks supply of travel rations and canteens of water and one more fare to somewhere else. She would be able to escape just before the army got here if she was unable to pass her information along.

She spent the first day wandering around the city, looking for anyone who seemed to be military or guards, and trying to follow them back to their headquarters.

She found a guard, but he took one look at her grubby appearance and told her to get lost. When she mentioned that she had some important information which would help the defense of the city, he refused to believe her, and again sent her on her way.

She reluctantly decided that maybe it would be a good idea to get cleaned up, so she found an inn and rented a room for the week. She cleaned herself up, got some rest, and went out to try again the next day.