Granted, the name sounds incredibly stupid, but so far, it sounds amazing. Here's a live blog from Infendo:

And of course, a picture of the controller. 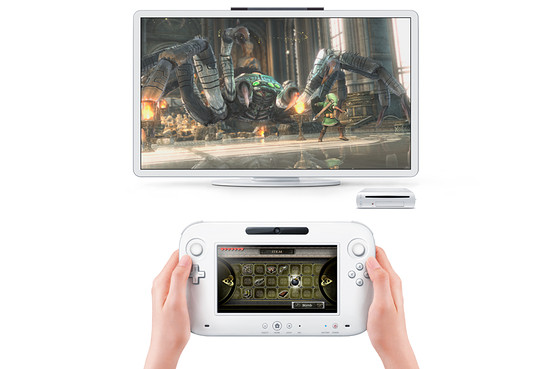 On Tuesday morning, Nintendo debuted the Wii U, the company’s newest video game system. It’s the successor to the blockbuster Nintendo Wii, which has sold more than 86 million units worldwide, and the first announced member of the next generation of game hardware.

Earlier this week, Nintendo gave me an advance preview of the device. I’ve handled the hardware and tested out a few games, and while the product I saw was not finished, I can tell you that it’s a big leap for the company. This device closes some glaring technological gaps between Nintendo and its main competitors, Microsoft and Sony. And more importantly, it introduces new, exciting modes of gameplay. The Wii U breaks the decades-old convention of gamers holding controllers while staring at a TV screen.


Before I get into detail, allow me a short disclaimer: The hardware I played with was a prototype, not a finished production model, and the games I played with were essentially proof of concept demos, not necessarily software under development. Nintendo says the console’s actual release date will fall sometime between April 1 and December 31, 2012, so lots may change before it hits stores. That said, I believe I got a good feel for the console and what it will eventually look like.

The first thing to note about the new console is that it offers full 1080p high definition video — a feature sorely lacking in the Wii. The graphics on this system look great, as good as anything you’ve seen on Xbox 360 or PlayStation 3, even in this early prototype stage.

The big idea that sets the Wii U apart from its predecessors and competitors is a new kind of controller. Instead of a hand-sized game pad studded with joysticks and buttons, or the motion sensitive wand used on the Wii, the Wii U is controlled essentially by a tablet computer. It looks and feels a lot like an Amazon Kindle –just with a few more buttons and a color screen.

The controller is about the size of a hardcover book, with a 6.2″ LCD touch screen at the center. On the borders of the screen there’s a traditional direction pad, buttons, and two control sticks. On the back, there’s two trigger buttons, and a ridge that makes the whole thing easier to keep in your hands. You’re meant to grip it in front of you with hands on the left and right edges.

That color touch screen is the key to everything that’s different and cool about the Wii U. On the most basic level, it allows the system to convey more information to the player; something complementary to what’s on the main monitor, like maps, inventory information, or different camera angles.

In one demo, I saw a short animated clip from a hypothetical high-definition Zelda game. On the main TV screen, the video depicted Link walking into a gorgeously animated cathedral and fighting a giant monster. Meanwhile, the controller screen showed a map of the area, a button to change the lighting, a button to change the camera angle, and game details like health level. Normally, this information would be hidden behind several button pushes, or tucked into the corners of the main display, obscuring the action. But on the Wii U it’s conveniently placed on the controller screen –always there when you need it, but not in the way.

The Wii U controller gets even more interesting when that screen is used to provide a new point of view, not just static details like a map. In another demo, I saw a video clip recorded by a car rolling down a street in Japan. On the main TV monitor, I could watch out the front window of the car, a normal point of view familiar to anyone who has ever played a driving game. The controller, held directly in front of me, displayed the displayed the same straight-ahead point of view. But when I pressed one of the buttons, I had my first Wii U “eureka” moment: The view on the controller automatically changed to show a rear facing camera. In the click of a button, I had both straight-ahead point of view (on the TV) and a rear view mirror (on the controller).

That was a cool way to interact with a driving game. But then the second screen on did something even cooler. The Wii U controller contains the same motion tracking hardware as a Nintendo Wiimote, which means the system can track its relative position at all times, and update the controller screen depending on its orientation.

So when I faced the TV and held the controller directly in front me, the controller screen displayed the same straight-ahead point of view as the TV. But when I turned the controller to my left, the video on the controller moved with with me, and showed the view out the left side of the car. I turned to the right, and the view moved with me again. All of this happened smoothly, in real time, and in a full sphere of vision. It wasn’t just swapping between different static camera angles, but looking around the world, seamlessly.

Essentially, if the TV was the driver of the vehicle, looking straight ahead, the controller was a passenger, free to pan and tilt their head to look in absolutely any direction. This is where the Wii U starts to create whole new ways of playing video games.

Imagine a game where you’re driving a tank. The TV could show the view ahead, just like any other driving game — but the controller shows the view out your cannon barrel, which can rotate and fire in any direction. Or better yet: Imagine a two-player game, something like Grand Theft Auto, where your friend is driving a car, trying to evade police, and you’re the passenger, turning and firing a gun out the windows while your friend keeps their eyes on the road.

Another demo proved there’s more to this system than different camera angles. In a minigame called Battle Mii, I squared off against two Nintendo staffers, each equipped with a standard Wiimote with nunchuck attachment. They played their game on the main TV screen, divided into two views, a standard multiplayer setup. I played the game on my own, using the Wii U controller and screen.

In practice, this meant we were playing in the same game, yet playing different games. I was at the controls of a small spacecraft, looking out onto a battlefield through the view on the controller screen. I could rotate and change my view in any direction, just by rotating and moving my body and the controller. (It’s a lot like the “periscope mode” on the Nintendo 3DS title Steel Diver.)

Meanwhile, the other players were Metroid-style space commandos, running around the battlefield on foot. We all had different viewpoints, depending on our relative location –nothing unusual for a multiplayer game. But unlike any other multiplayer game I’ve played, we also had different experiences. They were playing a traditional static game, holding a joystick and staring at a TV. I was playing an immersive physical game, spinning around in circles, moving both controller and screen.

Another demo showed how these differing viewpoints create interesting game dynamics. Chase Mii is a game of tag, where up to four players run around a course to find and tag the fifth. But the four people doing the chasing all play on the TV screen –and the person eluding them uses the controller. In practice, this means the seekers can only see their character’s point of view, and can’t look at another corner of the TV to find out where their target is hiding.

The person who is hiding is also given more information: In addition to their character’s point of view, the controller displays a live overhead map of the course, so they can see the locations of all players at all times. It’s something that wouldn’t be possible if everyone were playing on one screen — it would be too easy to glance over at the other guy’s section of the TV.

I’ve spent a lot of time here trying to describe the sometimes complex series of viewpoints and interactions that go into a Wii U game. But the important takeaway is this: It’s a lot of fun to play.

Maybe you’re a hardcore RPG fan who wants a better way to manage inventories. Or a racing devotee who wants better views of the road. Or a casual gamer who wants to team up with (or against) your friends at a party. I think the Wii U has a lot of promise for all kinds of players. I’m excited by the possibilities.

I like the concept but I do hope the controller changes.

"This is all going so well"

"This is all going so well"

Wii U sounds like the noise a firetruck would make.

That's better than what I thought it sounded like.